We left Oriental the following day, heavy with remorse as we watched my sister and her kids wave us out of the marina. I cannot WAIT to get them all back on the frog. Even Sophia, with all her life jacket hating fury!

We were less disparaged to leave Oriental, or, Cakilakistan, as our friend Brad lovingly refers to it as. The Neuse River is a lovely place to sail in, but I’d had enough encounters with gun packing paranoid drunk boaters to last a minute or two.

We sailed for a quick 22 miles to Beaufort, North Carolina. We made a great first impression as we hailed the Beaufort Town Docks for dockage instructions from the wrong marina. After we made it to the right marina, we hailed the dock-master again for specific instructions.

I was told to pass our dock and approach our slip into the current. Upon turning around I was forthwith given the smack down by the notorious Taylor Creek current. I had about 5 seconds to get the Frog under control as I navigated her diagonally into our slip. I was desperately trying to avoid the stern of the biggest monstrosity of a mono hull sailing yacht I have ever seen, parked across from our slip. It was over 104 long to be exact. And while the owner is never present to enjoy her majestic sailing magic, he has a permanent deluge of matching uniformed crew members working full time to keep her waxed and shiny. I waved at them pathetically as I simultaneously tried not to smash into them.

I don’t know how I did it but I pulled the frog in with absolute perfection. The dock master was impressed. Of course he couldn’t see my hands shaking at the wheel as I tried to slow my heart rate. I don’t think I could afford an insurance policy big enough to cover a run in with that thing. 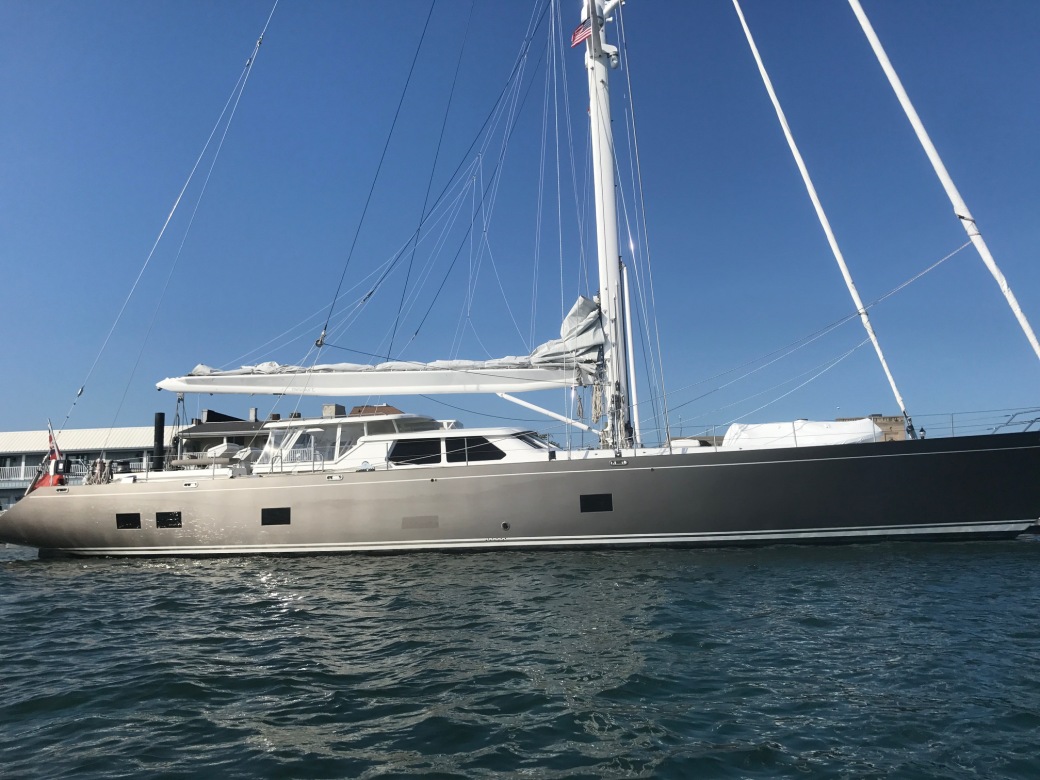 The entire length of it doesn’t even fit into the wide angle lens of my camera.

And if that encounter with the Taylor Creek current wasn’t enough to teach us a lesson, we got another shortly after.

After settling in and seeing the beautiful sight which is Beaufort, we decided to go on a dinghy ride up the creek.

Taylor creek is a long and narrow water way running adjacent to the town center, and on the other side it is home to numerous wild horses that roam the swampy shores.

It’s quite enticing, and full of sail boats moored at no cost in these unchecked waters. We went up the creek in our little 2.5 horse powered dinghy for about 15-20 minutes, took a dip, got our toes pinched by crustaceans, and promptly headed back… against the current.

we made it back to our boat, hot and tired and feeling pretty stupid for not having predicted that.

So far we were quite taken by Beaufort. The town has a deep and rich nautical history, and some incredible sailing opportunities. It didn’t hurt that the minute I stepped off the boat I walked into a store directly across the dock to cool off in the AC only to see my jewelry showcased behind the counter! Handscapes Gallery had placed a wholesale order with me earlier that year at a show in Baltimore, and there it was! This place was making a pretty good first impression on us.

Unfortunately, Beaufort knows exactly how cool it is, and their wet slips are priced accordingly. We decided to give this Pirate style anchoring on Taylor Creek thing a shot. There were a few things to grapple with first. The moorings are unregulated, and technically are a free for all even though they are painstakingly placed by individuals for their own use. But rather than take an open mooring (which were far and few between) and risk an angry boater, we decided to go for the more complicated route of a Bahamian anchorage.

Those can also be an issue in this creek, as swinging too close to these tightly placed moorings can risk a run in with an angry boater trying to protect his mooring space in the sardine can that is Taylor Creek.

But we agreed to put our trust in a dual anchor system rather than a mystery mooring which could prove to be nothing but a buoy tied to a crab pot.

The Bahamian anchorage is named thus due to the numerous shoals in the Bahamas that require boaters to limit their swing room to avoid running aground, and in our case, into each other. With two anchors set off the bow, the swing room is minimal. And to keep the lines from twisting as the boat turns from side to side, one rode is tied to the other at a depth lower than the keel.

Our first ‘advanced’ anchorage was a success! We held fast all night, against the current and even a storm or two.

The view was lovely, but the bugs were murder. I’ve never experienced anything quite like that. I wish I could say it was worth it but I’m still weighing the costs.

In the meantime our next adventure was set for Cape Lookout. It was a mere 15 miles away, in the ocean! Our first salty sail.

We waited for the absolute perfect conditions, and passed the days as best we could in the shade and out of the relentless sun, but we started to get grumpy. I think we were a little nervous about going ‘outside’ as they say. But sitting still doesn’t really become us so we finally just up and went.

I had no idea what the inlet would be like, or the ocean for that matter, but we timed it to make our exit at the tail end of a receding current.

It started off a little bumpy

And quickly turned to mad chaos. I tried to do as much research as I could to prepare ourselves for this short little jaunt to Cape Lookout, and no where did anyone say to get ready for stacked waves high and tight to bury your nose in all directions as you exit the inlet.

This particular inlet has water rushing in and out from 3 sides, with a furious strength. The worst part, was that we weren’t really sure if this was an inlet thing, or an ocean thing, having done neither.

After powering through the worst of it, we got our answer: It was just an inlet thing.

The ocean was easy breezy all the way to the lighthouse after that.

Cape Lookout is accessible only by boat, and the Lookout Bight is the sweetest little anchorage spot anyone could hope for. It’s protected on all sides from the elements.

The lighthouse is open for your viewing pleasure, and dolphins and sea turtles swim about constantly, and a beautiful ocean view is just a short walk on the other side of the dunes. 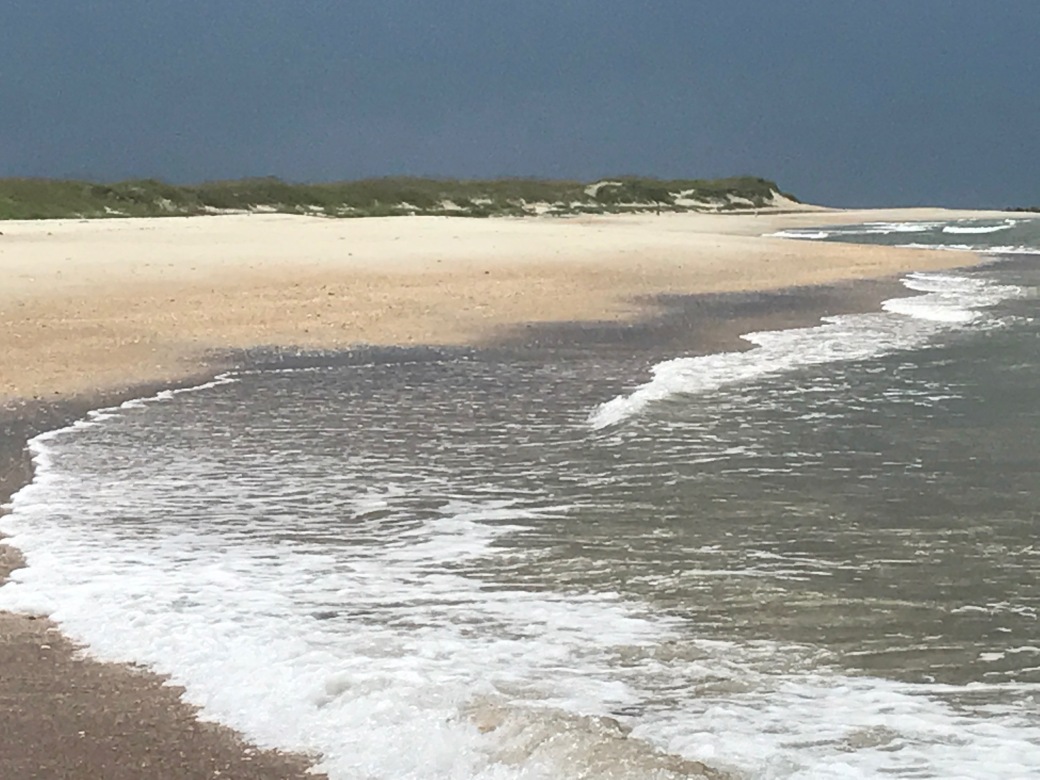 We had only planned to stay a night, but after discovering that the Bight was also home to an amazing display of phosphorescence, we quickly changed our minds.

The next day we lounged around, walked the pristine beach and went shell hunting… all in the effort to ignore the once in a lifetime event that was about to take place that we did not bring glasses for.

We were surrounded by 10 or so sail boats at anchor, all gearing up for the big solar eclipse. We kept telling each other it was no big deal, and it would probably be cloudy anyway. But as the moment approached, I started to have some regrets…

So we got in our dinghy and went from boat to boat in a desperate last minute attempt to get some glasses. Amazingly we found someone with 2 extra pair! Very nice sailors, and two of them were from Asheville! Small world.

Thank goodness for the spare glasses. The only other option would have been the first boat we stopped at, packed with 7 or so women over 50, extremely drunk and naked, just DYING to share their glasses with Adam if we couldn’t find any.

We made it back in time to see the eclipse from the bow of our boat. The clouds receded just long enough to view it uninhibited. Definitely worth it, and doubly so at Cape Lookout.

The sunset that followed was perfect. 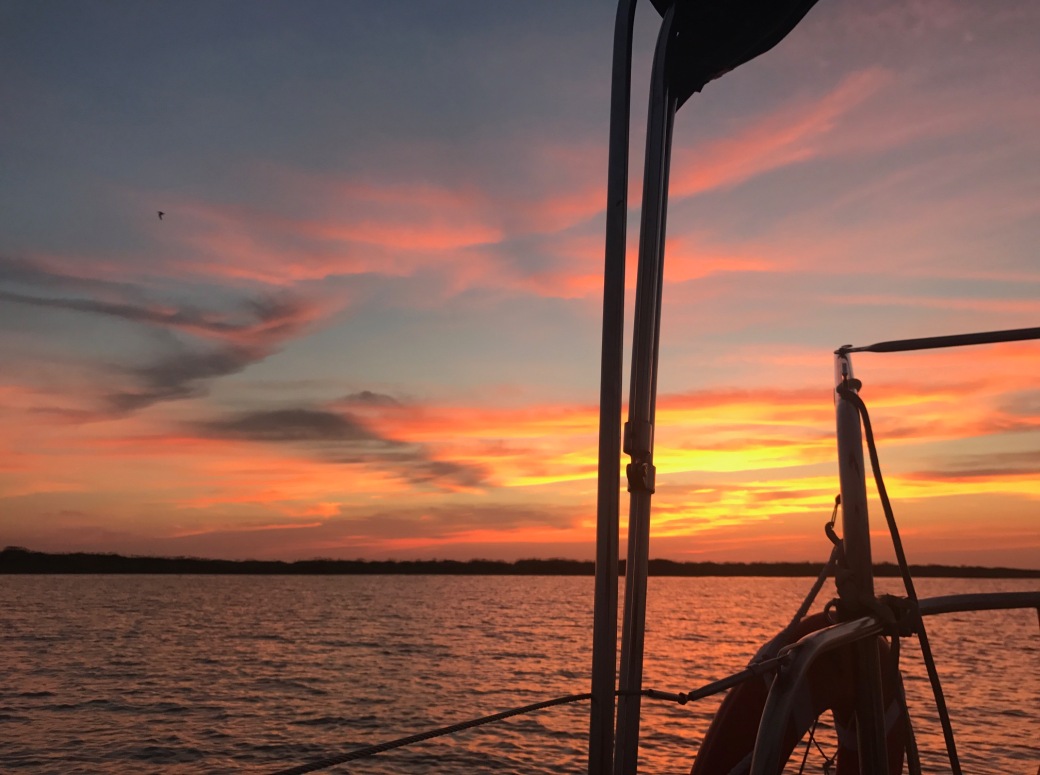 The following morning we left our lovely anchorage in Cape Lookout and motored along a glass ocean back to Taylor Creek.

We might just end up staying here in Beaufort after all. It’s got everything we could ask for our boating adventures. We will see how the next few days progress.