We left our little hideaway at Belmont Bay Harbor Marina, at 630am. The sun was out and almost intolerable by 8 or 9. We have a shade cover! We passed a sail boat that was using a sheet to shield their cockpit from the sun, I probably would have done the same. The wind wasn’t great, but as the afternoon approached, we learned a little bit about the river’s current. We were going about 3 knots with what we thought were decent winds, but the tide was in, so the current was against us. When the tide started to go out, we bumped up to almost 5 knots with no wind! I started to do some calculations of all the possible outcomes of these forces colliding, or working alongside. So many variables!

The tide was in our favor for the majority of our trip so we were able to traverse 34 miles in only 6 or 7 hours. Better than our last jaunt. We anchored at the mouth of Port Tobacco River. Crab pots everywhere! It made our anchoring a bit dicey, but also provided us many reference point while checking to see if our anchor was dragging. Our anchor is a bit over kill, but its worth it for a little boost of security. We have named it ‘the Beast.’ 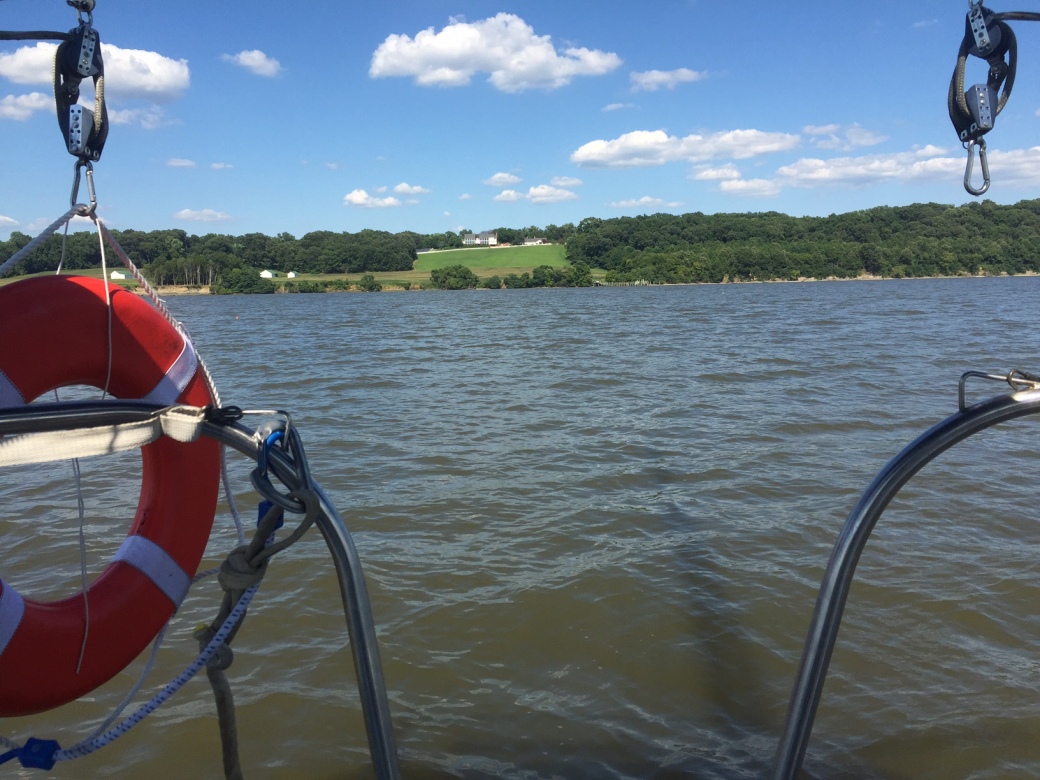 We dropped anchor outside of somebody’s breathtaking homestead, they didn’t seem to mind. It was about 150 degrees outside, so of course we took a dip. The water was even warmer than the air, so we got out pretty quick. Didn’t want to have an encounter with the Potomac River Toe Munchers.

The sunset was lovely,

the moon was also breathtaking.

Nothing really compares to waking up on the water. We both slept like mountains so we were ready for more south bounding! We anchored just in site of the 301 Harry Nice Bridge. Another day of motor sailing. No worries, we’ve got nothing but time. Not really, but I see no need to feel rushed when our 11 horse power engine putts along like a galapagos turtle. It has no agenda.

We slowly approached the steel archway. 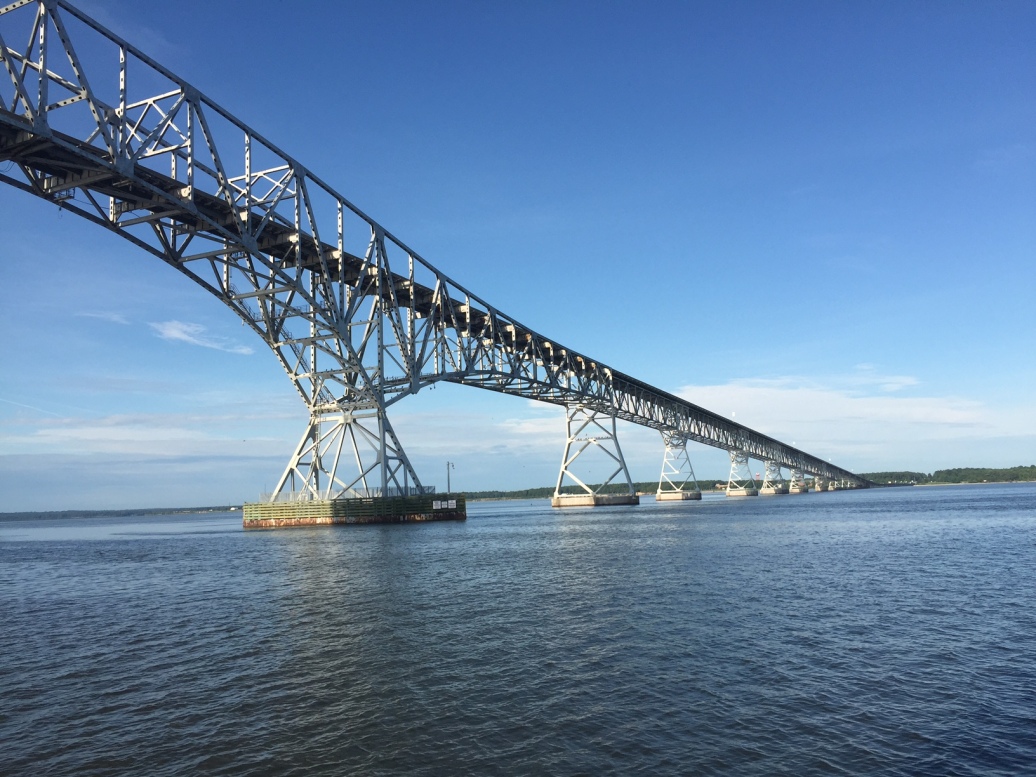 The tide was in, so we poked along. The river opened up to over double its previous width. The horizon was clear and beautiful.

Had a little visit from the Range Patrol boat! How exciting!

Apparently, there is a section of the Potomac River that doubles as a firing range for the the Dahlgreen U.S. Naval Laboratory. We were right in the way of their scheduled firing. So off we scooted, hugging the edge of the shoal markers on the east side of the river. 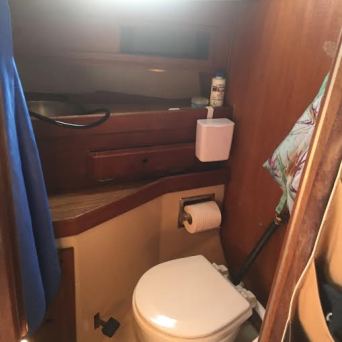 Not long after, the wind picked up, to my absolute elation. But then I looked to the starboard side and saw this

which I promised looked much more daunting in person. We finally had wind! But it was too much, so down the main went, to its little handkerchief configuration.  We anxiously motor sailed around the long western shoal of Cobb Island. We were just in time to tie up to Shymansky’s dock before the endless rains came.  Cobb Island is on the Maryland side, but, given its northern location, its pretty remote. There isn’t even a bank here. It has the isolated island feel and I love it for that. 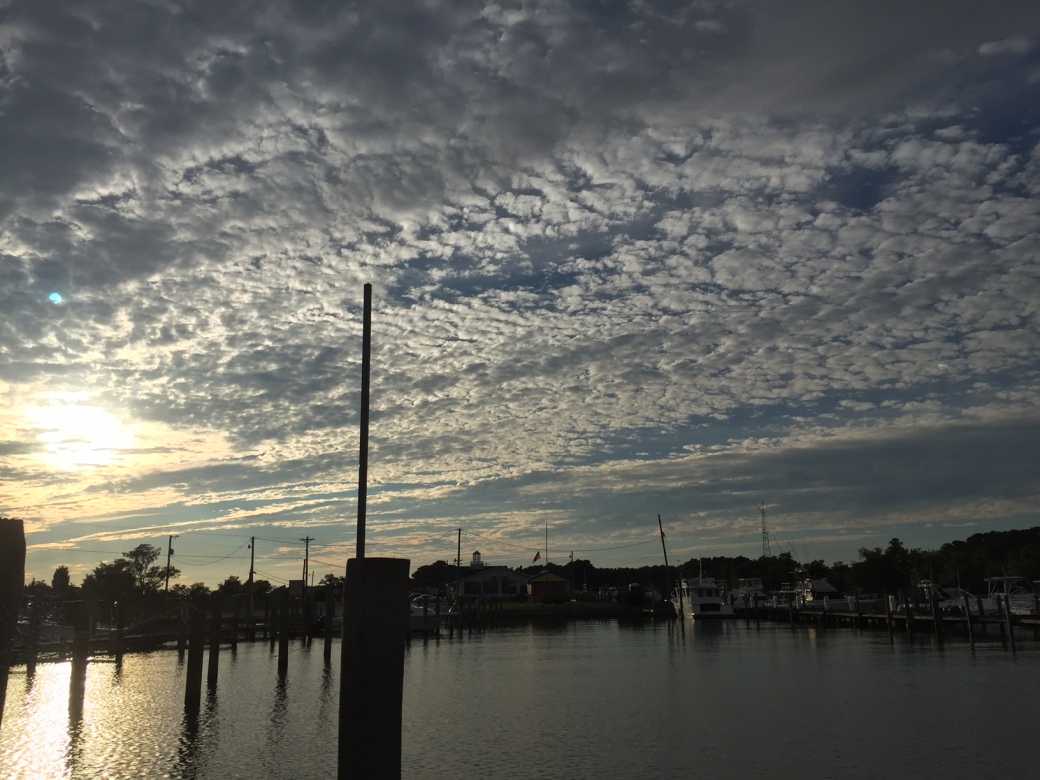 Well, after a year of fixing just about everything on the boat, we have no more reasons to procrastinate. We are going south! We even put the big anchor on.

We have allotted about 10 days to get from the northern tip of the Potomac, to its mouth, 96 miles. Adam likes to determine our average pace based on the boat’s maximum speed, 7 knots. I on the other hand, am averaging 3 knots, because I have noticed that conditions usually aren’t in our favor. Not to mention we don’t know what we’re doing. I am hoping that we will traverse the 96 mile journey in a few days, and have 5 or so more to peek our little nose into the chesapeake. If we don’t run away in terror maybe we will even sail on the Chesapeake!

Day one. Not sad at all to leave the Washington Sailing Marina. We didn’t really fit in there. I just hope we don’t have to turn around and go back! We puttered down the  long narrow channel into the potomac at about 630am. I went ahead re-rigged the boom vang while we were moving slow. I had taken it off in frustration on our last sail, not even knowing what it was. I just knew it was in the way so off it went! After the boom vang was puzzled back together we did a little reefing drill. Later the winds picked up and I was able to reef the main in no time and with zero snags and snarls. I would have taken the sails down altogether but we had a deadline to meet! Our first destination was Belmont Bay Harbor Marina on the Occoquan River. There aren’t many marinas with transient slips and sufficient depths until you get about half way down the potomac. Belmont Bay marina closes at 5, so if we hit any problems at all it was going to be a squeeze. And of course, we did..  First of all we faced a head wind the entire way down. And the northern part of the Potomac is so narrow for tacking. About 14 miles in, right where the potomac starts to open up and meet the Occoquan bay, a little rain shower and wind came to greet us. There was no thunder and the rain was minimal, but the waves rocked us. Literally.

We took the sales down in a panic, and motored into the wind and waves as best we could, ultimately docking at Belmont Bay Marina 7 1/2 hours after our start. The channel approaching the Occoquan River was painfully narrow and long with the current strong and against us. The waves were on our butt, making the progress uncomfortable, but progress nonetheless . Beautiful river. We saw numerous Bald Eagles, always under attack by Ospreys. 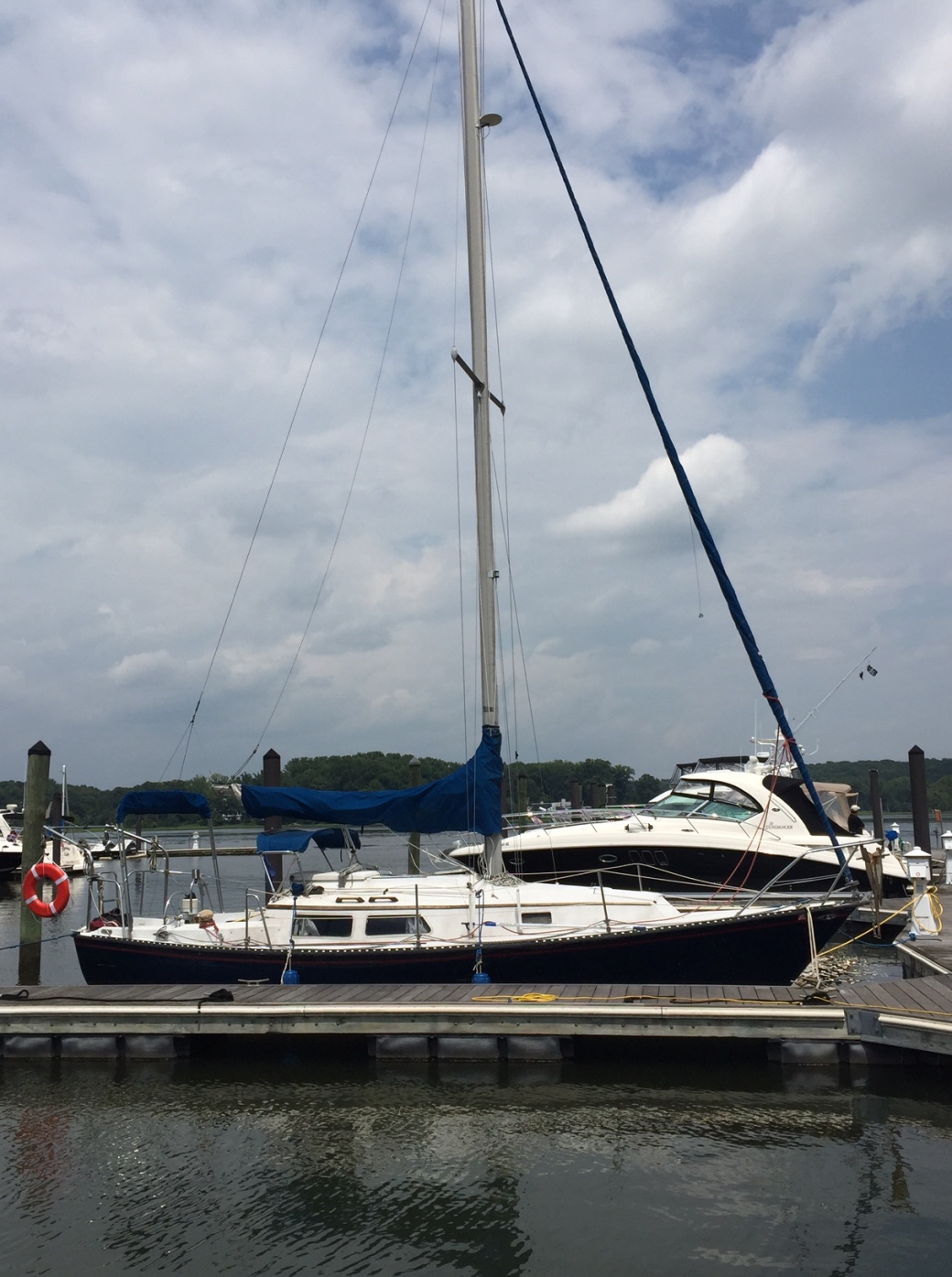 And day two! 80% chance of thunderstorms… I don’t think I’m quite ready for that, so here I am, still in Occoquan, VA waiting for day 3 to come around. 0% chance of anything but sun. It’s going to be a hot one!

We went ahead and tended to some things that we didn’t have time to before our trip. Our rolling furler jib line has seen better days. We had planned to fix it, but by the time we bought the line, we realized after peering into the furling mechanism that it is actually a continuous line. We were not ready to tackle ‘line splicing’ in the precious hours we had before our trip. But today was not a day to be wasted, line splicing it is!

Of all the stupid repairs we have made on our boat, this was by far the absolute worst. It felt like we were birthing a baby. How does anyone get the sheath to fit in the fid and then get both to fit in the other sheath? Crazy town. But after we cut the initial jib furler line, we were pretty much committed. So we did it. Do I trust it? Not much more than the ratty tattered old furler line, but at least we learned a little something about line splicing: it sucks.

Questions from The Frog:

The whole time we pitched in the waves during that little storm I was struck with the realization that any anchorages within immediate reach were either completely exposed or too shallow for our 4 foot draft. The little bit of wind and rain we met wasn’t even a big storm, but it left me wondering what a real squall would be like.  Should we motor into the wind? Heave-to? Or drop an anchor even if it has to be exposed to the conditions?

We have come into possession of a 28 foot sailing boat! An immensely underrated gift from my father. I don’t think he wanted to give it to us because he knew  it would be a lot of work, money, and all those other things people say about sailboats. my sister and step mother helped talk him into it. And now here we are! Where to start? Well, we need to learn how to sail it. And oh, wait, we need to fix it too. After first stepping aboard the spider web infested vessel, I assumed we would be puttering about the Potomac in a matter of days. In fact, I thought we could sail her down from the Anacostia River to North Carolina in just a week or two. Just need to tend to a few MINOR repairs…

We have: replaced the toilet, replaced the gusher foot pumps for both the sinks, replaced the batteries, re-wired the running lights, put two holes in the bottom of the boat-and sealed them up, broken and fixed the steering cable, run aground (right in front of our Marina’s restaurant), fixed the inboard diesel and all its little smelly parts including the glo plugs, the lift pump, the fuel lines, the fuel filter, the stuffing box, the transmission and the wiring harness (thank you Adam Blake)!, sealed a leak in the holding tank (gross!), replaced through hull valves, fixed the bilge pump, reinforced the cleats, replaced parts of the teak wood interior, re-sealed the hatches, replaced the mainsheet and a few pulleys… I know I am forgetting a few things…

A year has passed and we have sailed the frog about a dozen times. Luckily, in our home town of Asheville, North Carolina, there is a lovely little lake full of kind and wonderful sailors who have taught us more than we ever could have taught ourselves. We have sailed Jets, and Flying Scotts, Sunfishes and San Juans, all in preperation for our journey south. Now we are about to take The Frog down the Potomac to the mouth of the Chesapeake. IF all goes well, I will be reporting from the Yecomico River (or somewhere in the vicinity) in a few days time!